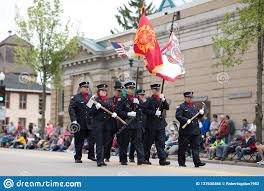 1. NO drilling that will obstruct the forward progress of the parade.

2. Fire Department and Auxiliary Officers (ONLY) to salute the American Flag.

3. Location of the judge's stand to be designated three hundred (300’) feet in advance.

4. Apparatus or Bands, not to be judged with marching units.

a. Driver's and all declared riders shall be counted and judged when in full uniform ONLY.

5. Marching units shall be judged solely on marching ability and appearance, although the number in line counts towards final score, it's only a minor part of judging.

6. There shall be a space within fifty feet (50') between each marching unit.

a. A marching units consists of band, firefighters, auxiliary and apparatus.

b.  An auxiliary marching without a fire department must march fifty feet (50’) from the preceding unit.

7. The formation of a unit shall be as follows:

8. Color Guard shall constitute of two (2) or more guards with arms and an American Flag.

a.  A Color Guard may include Junior Line Officers with hardware.  NO WHITE HATS allowed in the Color Guard.

11. There shall be NO sounding of sirens, horns or any other audible devices within the line of march. EXCEPT FOR AN EMERGENCY.

a. Emergency lights are permitted.

13. Uniforms will be of local standard issue. There shall be NO variations other than Company standard to Signify officers.

a. Service awards may be worn and will not be judged.

Units of over forty-nine (49) Marching firefighters shall march four (4) abreast.

15.   When marching three (3) abreast, the odd marcher shall march at the end of the outside line.

When only one (1) odd marcher that marcher shall march at the end of the right line.

a.  A single marcher or Officer marching behind the Saluting Officer, shall march in a direct line behind that Officer, in lieu of to the right.

10 Points -  For use of audio devises. EXCEPT IN AN EMERGENCY.

5 Points - Marching without an American Flag

5 Points - Colors not in proper formation

5 Points - Banner not in proper formation

5 Points - Officers not in proper formation

5 Points - Breaking ranks during parade. EXCEPT IN AN EMERGENCY.

1 Point -  All shoes must be of same color

1 Point -  Uniform must be of local standard issue

1 Point -  Each infraction of talking, waving, laughing -  ONE PERSON MAY CALL CADENCE

1 Point -  Each infraction of out of step. EVERYONE MUST BE IN STEP WITH AMERICAN FLAG

17. For a company/department in the line of march with ten (10) or more marchers, a tenth (l/10th) of a point shall be given for all uniform marchers

For those uniformed marchers less than ten (10) in the line of march there will be NO deduction or addition of a tenth (l/10th) of a point.

For Auxiliaries, a tenth (1/10th) of a point shall be given for 6 (six) or more marchers in line.

No points deducted or added for less than six (6) marchers in line of march.

An Auxiliary unit must consist of a full Color Guard.

A unit of less than ten (10) will still be judged and eligible for prizes they qualify for.  An Auxiliary unit with less than six (6) marchers will qualify for all prizes.

18. Marching departments and auxiliaries shall be judged on a credit basis of zero (0) to ten (10) points for:

a.  This award will be decided by the host company.

20.  Each unit to be eligible for an award must start in the forming area and continue in the line of march to the finish line and through the Host Company’s Color Guard.

21. Non-Association members will be awarded prizes only if the host Company/Department desires.

a.  We will judge Fire Departments, Ladies Auxiliary and Military Organizations.

b.  We do not judge musical groups, floats, local organizations and apparatus.

A judge may be assigned to the forming area only for rule information.

A judge may be assigned at the conclusion of the parade to ensure the units complete the parade and check driver's uniforms.

The number of judges assigned shall be determined by the OCPJA Chairman for the purpose of judging marching units.

There shall be a sign posted at the beginning and the end of the six hundred feet (600’) judging area.

The first Judge may speak to the units and correct errors observed.

25. Disorderly conduct at any time will disqualify the entire unit.

Disqualification is the discretion of the host Company/Department.

26. In order to be judged in the category of marching with music, a musical group must consist of at least four (4) members playing instruments and be marching in proper formation in front of the fire Company/Department

27. Only the Officer-In Charge may have a communications devise.

28. Two (2) Companies/Departments may merge together if they have less than ten (10) marching members present and have the approval of the Host Company/Department.

29. The judges that are assigned to a parade will not leave until the Host Company/Department is satisfied that the judges have fulfilled all their duties.

30. When marching without music, there may be one member calling cadence or one drummer in uniform and in proper formation. (Drummers shall be placed last in line in compliance with rule fifteen #15)

a.  An Auxiliary member will be permitted to call cadence in the line of march except when passing the reviewing stand.

b. The GUARD on the EXTREMENT RIGHT of the Color Guard will be the only one permitted to call PRESENT COLORS OR PRESENT ARMS OR RETREAT COLORS OR RETREAT ARMS, when passing the reviewing stand.

31. When a Company/Department has ONLY a Color Guard and a Saluting Officer, in the line of march, they will be judged in those two (2) categories ONLY.

32.  To be eligible for prizes at the County Convention Parade, dues must be paid-in-full and up-to-date.

33. Judges will break a tie as follows:

4. Number in Line of March

NOTE:  MEETINGS ARE FOR MEMBERS ONLY AND INVITED GUEST.

PLEASE CONTACT SECRETARY OR PRESIDENT IF YOU WISH TO ATTEND A MEETING AND ARE NOT A MEMBER OF THE ASSOCIATION.

Newsletter can be found in Files..

Firemen's Association of the State of New York - FASNY

Copyright © 2006-2021. YourFirstDue Inc. All Rights Reserved. Designated trademarks and brands are the property of their respective owners. Content on this web site is supplied by Oneida County Volunteer Firemen's Association. YourFirstDue Inc. cannot be held responsible or liable for any content, text, pictures, or any other media found on this web site. Maintained by the members and staff of Oneida County Volunteer Firemen's Association.
Management Login
Powered by